On Wednesday, an apparel factory building in Dhaka, Bangladesh collapsed in what the New York Times called “the deadliest accident in the history of the garment industry.” The collapse of the factory building has killed 334 people so far, with rescue teams still searching for survivors buried in the rubble.

Following closely on the heels of a November fire that killed 121 at another factory near Dhaka, the disaster has highlighted the dangers that garment workers face in countries like Bangladesh, which is the world’s second largest exporter of clothing. The situation is made all the more tragic by the fact that the garment workers had notified authorities about serious cracks in the building beforehand, only to have their superiors ignore the danger and refuse to evacuate their employees.

Violent protests sparked by the disaster erupted in Dhaka on Friday, as demonstrators burned two factories, damaged vehicles, and demanded the death penalty for those responsible for the tragedy.

The factory has been linked to numerous well-known Western brands such as JC Penney, Wal-Mart, Mango, and Primark; Primark is one of the only companies explicitly acknowledging their involvement.

Although my primary shopping takes place in thrift stores, this news hit alarmingly close to home for me as I realized that Primark is the UK name for a store called Penneys in Ireland (for my American readers, Penneys is a bit like a European Forever 21, with clothing that’s trendy and highly affordable, if not always made to last). Like most of the students in my program, I have made multiple purchases at Penneys—after all, who can argue with €2 sunglasses?

While it’s been easy in the past for me to make pious-sounding claims about avoiding brands like Nike and Gap based on their poor track record in the 90s and 2000s, the truth is that I either don’t desire or can’t afford to shop at many of the places I claim others should avoid. In all honesty, I know shamefully little about shopping responsibly.

This shortcoming was underscored all the more starkly on my recent trip to Sweden as I began talking with my native hosts, Magnus and Gustav, about their eating habits. Both are vegetarians, and as they began talking about how they go about buying food, I found myself blushing inwardly with embarrassment at how little thought I put into my choices as a consumer.

My Swedish hosts seek to make sure that any money they hand over to their grocer will refrain from damaging the earth, the animal, the farmer, the economy; I, conversely, seek to minimize damage to my pocketbook and body, without offending my tastebuds. My attitude of self-concern doesn’t stop at food; it extends to almost all of my buying.

I claim to know Christ and follow him; Magnus and Gustav make no such claims.

What’s wrong with this picture? It has become far too easy for Christians like myself to think that, by giving money to charities or volunteering in social justice organizations, we have done our part to be responsible caretakers of the world we’ve been given. But if innocent people are literally dying to provide us with $5 dresses, can we really hope to be called Jesus’ hands and feet?

When I was talking to Magnus and Gustav, one thing became quickly apparent to me: They have a different idea about what they are entitled to. While I, and many other American consumers, tend to think of ourselves as having a basic human right to certain things—things as simple as eating eggs, for example—my Swedish hosts took a completely different approach. This diagram illustrates the different thought processes at work here, with the green representing the average Western consumer (like me), and the red representing the thoughtful consumer (like Magnus and Gustav): 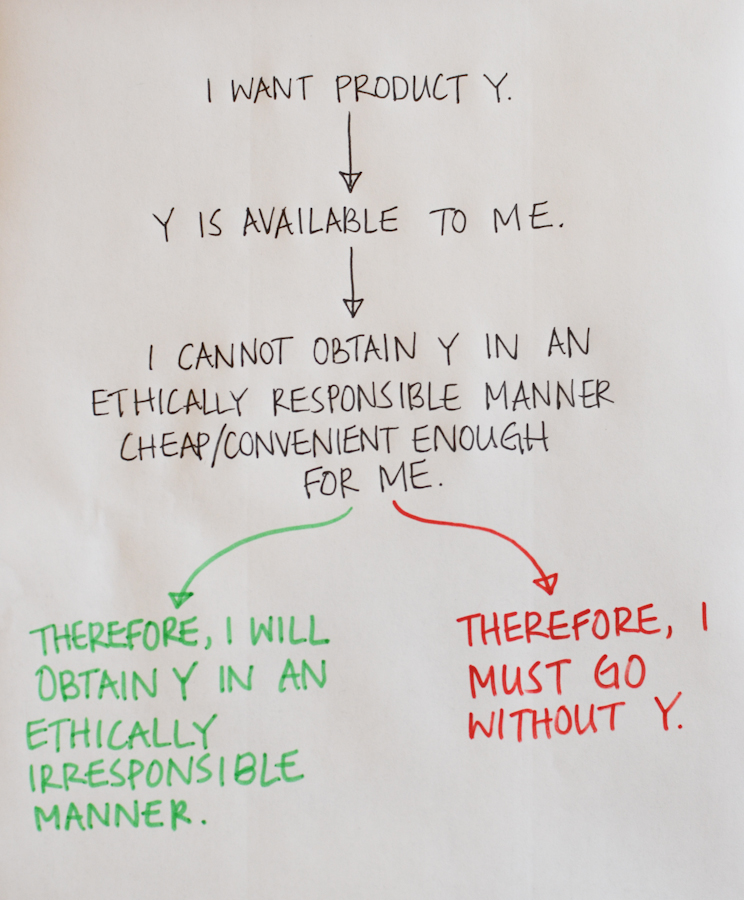 It seems to me that one of the core issues here is the fact that the average Western consumer has such a deeply engrained sense of entitlement, that it rarely occurs to us to stop and ask ourselves if we truly need whatever product or service is in question. And if we don’t ask ourselves that question, it is even less likely that we will weigh the value of the product or service against the toll its production will take on another person, nation, or environment.

One of the best examples of this is evident in most teenagers’ and twenty-somethings’ attitudes towards music: We have become so accustomed to having whatever we want, that it seldom occurs to us that our illegal downloads undercut the livelihood of the artists we claim to love so much.* I’ve seen this in my own attitude towards movies, too: I generally try to take the legal route to watch any film I want to see, as my mother, an ethics teacher, enforced a no-pirated-DVD rule in our home when I was growing up. Since hard copies of pirated films are monstrously prevalent in my hometown of Manila, my mother’s approach was an unusual one, and one I always proudly upheld.

Within the last few years, however, I started allowing myself more wiggle room in this area. Now, if I can’t find a legal route, I’ve discovered it’s not hard to squash what little remorse rears its head when I watch something from a questionable online source. The justification behind this is rather pathetic: I want to see this movie, and therefore I have a right to see it. In other words, I’d rather ignore legality issues and silence my conscience than ask myself, What is the worst that will really happen if I can’t watch this movie?

A speaker I heard recently even argued that this kind of attitude is what upholds the sex slavery industry: As a society, we’ve reinforced the idea that people have a “right” to pleasurable sex. Why, then, are we surprised to find that if individuals don’t have access to that pleasure in an ethical or legal way, they will hop over whatever barriers necessary to get their sex fix elsewhere?

Even though my temptations may seem a lot more tame, the common motive I share with the brothel frequenter is chilling.

In my own situation, it’s often easiest to tell myself that I simply don’t have the money to consume responsibly, and to use that as an excuse to avoid the hard work of changing my way of life. In an ideal world, of course, I would have the money to buy only organic food from a farm down the road and purchase designer products whose factories I could visit myself. But since that’s not possible in the foreseeable future, I know that some creativity and effort will be required on my part to figure out how to live as responsibly as I can with the resources and knowledge I have. Regardless of the work it will take, it’s time that we as Western Christians stop letting society define us as entitled consumers, and instead embrace the death-to-self-for-the-sake-of-others that Christ invites us into.

As we get strarted, it’s good to know that sites like Ethical Consumer and Not for Sale provide guidelines to facilitate wise purchasing. And one silver lining to be grateful for? Thrift shopping stands out as one of the most environmentally and socially responsible means of buying clothing, so there’s no need for die-hard thrifters like me to abandon our favorite method of shopping as we try to progress in other areas of consumption.

To learn more about the factory in Bangladesh, check out my sources here: New York Times article one and article two, USA Today, and CNN.

*I am aware that the debate about illegal music downloading is complicated, but for the moment, I maintain the position that purchasing music from the artist is a more ethically viable stance. For reading that challenges my view on this subject check out this recent Time magazine article, or read Ripped: How the Wired Generation Revolutionized Music by Greg Kot.