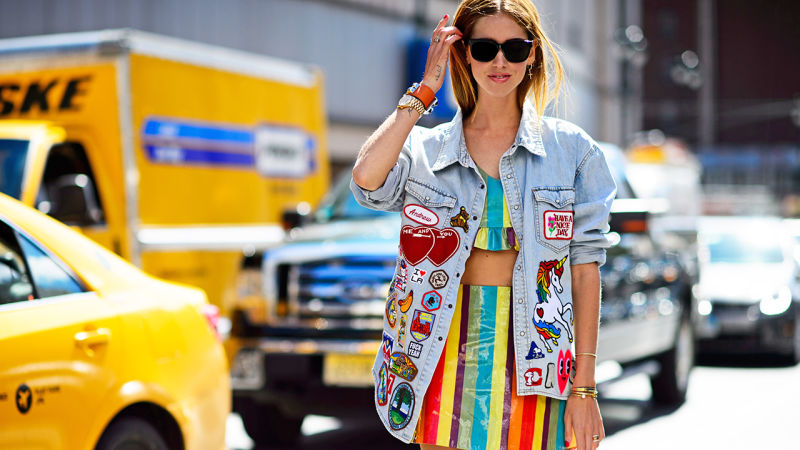 I wrote about patching together an antidote to New York newbie disillusionment for my favorite fashion news site, Fashionista. You can read the full article here.

The first time I found myself hunched over a secondhand denim jacket, pulling a needle and thread through what felt like an impossibly thick patch with my teeth, I didn’t think it was about reclaiming my relationship with fashion. I didn’t think it was about anything, really; I was probably too busy congratulating myself on the discovery that a toothpaste cap makes an admirable stand-in for a thimble. When you’re moving across the country with nothing but what you can carry, small MacGyver-isms like this seem worth noting.

And on the move I was. The denim jacket was purchased just a month prior to me leaving my college town, and I started sewing patches on it shortly thereafter to mark the stops along the meandering path that eventually led me to New York. There was a patch for camping in the Grand Tetons on a road trip west, and one for those delicious biscuits shared with a friend in Portland. There was a patch for a mini-pilgrimage based on a Sufjan lyric, and a patch for my first time wandering the desert at Burning Man.

Then, finally, there was a patch for New York, purchased during my first month in the city at a reception for an alternative art gallery in Bushwick. The crowd of young, hip Brooklynites bumming cigarettes off one another simultaneously intimidated and mildly repulsed me. Intimidated, because everything from their asymmetrical haircuts to their bondage-inspired accessories screamed I’M COOL, something I wasn’t sure my look could ever do. And repulsed, because I wasn’t sure I actually wanted it to. Still, I bought a patch from the gallery — a memento that was just the right size to associate myself with all of that coolness without feeling like it owned me.

It was a balancing act I had to get used to over the next few months in the city. Perhaps because I was living in a recognized fashion capital for the first time, my brain suddenly assumed that anyone who’d been living in New York longer than me knew more about fashion than I did. At the same time, the degree to which I saw clothing used as a means of displaying wealth or status grossed me out — even though the results were often chic.

If fashion was a game, I didn’t want to lose, but I wasn’t sure I liked the motives that led people to win, either.

Continue reading the rest of the article on Fashionista.