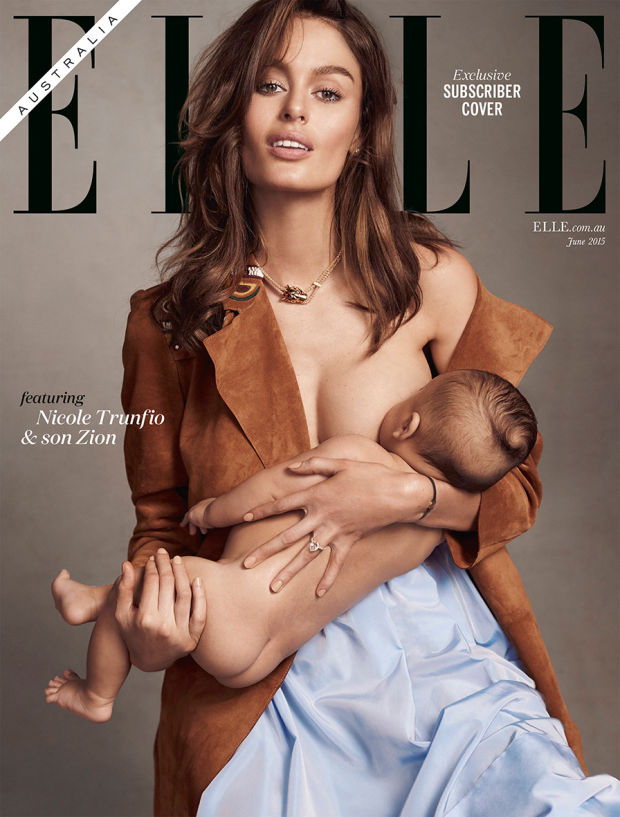 This piece was originally written for and published in the Washington Post under the title “How images of Mary, mother of Jesus, have long shown breast is best.”

The June issue of Elle Australia hit newsstands Monday, featuring model and mother Nicole Trunfio with her infant son, Zion. The newsstand cover depicts Trunfio in a designer dress holding a sleeping Zion in her arms. This mother-and-child shot is nothing out of the ordinary—while not exactly the norm for fashion magazine covers, it’s not the first of its kind, either.

But the subscriber-only version of the issue features a different image that is decidedly less commonplace. On it, Trunfio’s designer suede trench coat slips off her shoulder as she breast-feeds her son, exposing her left breast as she gazes at the camera.

Feedback about the image has been mixed, as readers disagree about what it accomplishes. Does showing this intimate moment on the cover of a fashion magazine normalize breast-feeding and celebrate motherhood, or sexualize an act that needs to be understood as purely maternal in order to gain wider acceptance in public spaces?

Or, could a controversial fashion magazine cover help bring abandoned Christian iconography back into vogue?

For those well-versed in art history, the debate may call to mind the changing role of the exposed breast in Western religious imagery. In Margaret Miles’s book A Complex Delight: The Secularization of the Breast, 1350-1750, the author traces the disappearance of depictions of Mary breast-feeding after the Renaissance.

Miles notes that before the Renaissance, “the lactating virgin was the primary symbol of God’s love for humanity.” To show Mary breast-feeding Christ was to display Christ’s humility and love for humanity by himself becoming fully human—so human that he was literally kept alive by the milk of his mother’s breast.

The breast-feeding Mary, or “Maria Lactans,” surfaced early in the Christian tradition, as evidenced by an image of Mary suckling Jesus in a 3rd-century fresco in Rome. The motif became increasingly popular in the Middle Ages and appeared in shrines and paintings as a symbol not only of Christ’s humility in taking on flesh, but as a reminder of the holy comfort offered to those who followed him.

But as Renaissance ideas and technologies blossomed, the Maria Lactans all but disappeared. The advent of the printing press made wider distribution of both medically motivated anatomical drawings and mass-market pornography possible. Thus, printing press images—especially of the female figure—simultaneously demystified and sexualized the body in ways it hadn’t been before.

Miles claims that after 1750, images of Mary breast-feeding all but disappear. With the breast’s new connotations in the collective imagination, it was no longer considered an appropriate component for images meant to inspire worship.

Despite the centuries separating Trunfio’s Elle cover from the Maria Lactans’s decline in popularity, it seems that public perception of the breast has shifted surprisingly little in the interim.

While women’s exposed breasts are found seemingly everywhere in today’s media, they’re shown almost exclusively in sexualized contexts. This, in turn, contributes to a stigma against real women breast-feeding their children in public, as any exposure of the breast is considered inappropriate by those who elevate the breast’s sexual function over its maternal one.

Some readers certainly think the Trunfio cover represents a step toward dismantling the stigma. “Cheers to… every one involved in making this happen,” one subscriber commented on the Elle Australia Facebook page. “It’s time to stop shaming women who choose to feed their baby’s in the most healthy and natural way possible.”
Others, however, hinted that the cover only helps normalize breast-feeding by depicting it as a sexy, glamorous act.

“I get the breast feeding awareness & reducing the stigma but what is with the bedroom eyes come hither look?” one commenter asked on the same Facebook page. “That is creepy and detracts from the point of the cover! Maybe looking at the baby with a mothers love look would have been the better look.”

If Trunfio’s cover succeeds in making breast-feeding in public more acceptable by making it seem sexy, it’s unlikely that it will help the Maria Lactans find its way back into Christian devotional images anytime soon. After all, belief in Mary’s perpetual virginity, assumed by the Orthodox and Catholic churches as well as some Protestant denominations, underscores the importance to many Christians of seeing Mary as something decidedly other than “sexy.”

A married woman, Mary could have rightfully consummated her relationship with her husband Joseph under Jewish law; nonetheless many Christian thinkers throughout the ages have believed it important to assert that she did not.

Yet images of the Maria Lactans—whether one believes Mary was a perpetual virgin or not—could provide an even better example for those looking to “normalize breast-feeding” than glamorized covergirl Trunfio.

After all, Jesus wasn’t drinking from a formula-filled bottle in 1st century Palestine. And if the most influential mother-child team in history were seen breast-feeding, what further justification could a modern mom ask for?