Moving from London Fashion Week to Milan, there is a noticeable shift in tone. London seems to highlight a crop of young designers trying out things that older, more established labels might not be able to pull off. Looking at the Milan collections this past week, one senses a higher level of caution. Still, several well-established Italian houses showcased interesting work. Here are five of my favorites from this week: 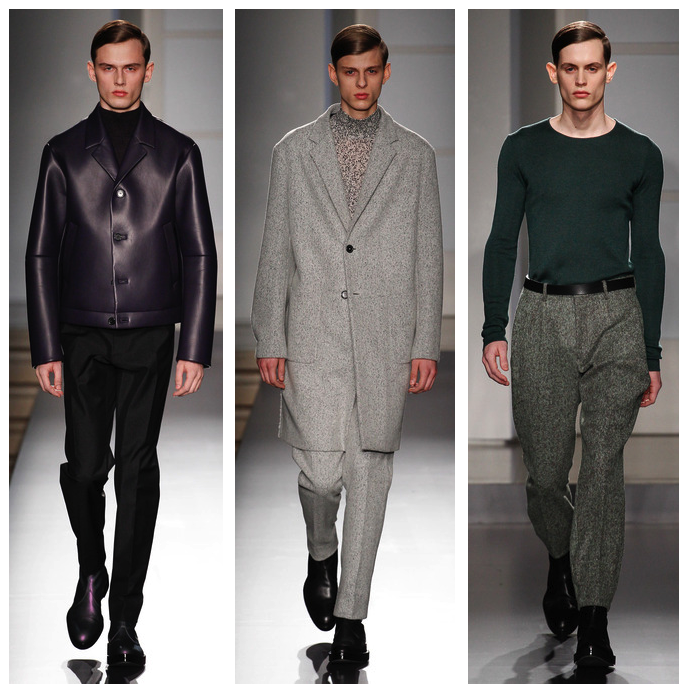 The Jil Sander brand has seen many shifts in the past few seasons. Raf Simons masterfully took the reigns of the brand while Jil worked for several years with the Japanese brand Uniqlo. In this time Raf managed to uphold the brand’s signature technique while still making bold design choices. Sander returned to her namesake brand in the spring season of 2012, but later in 2013 the announcement was made that she would be once again leaving the brand indefinitely. Nevertheless, the house’s design team created a fall 2014 collection of menswear that remained true to the label’s core values: minimalism, luxury and attention to the finest details. The collection consisted of jewel-toned ensembles in every shape and luxury fabric. All the silhouettes and tailoring were sharply realized with plenty of ease. It felt polished without being stuffy. The eggplant leather jacket, tight-fitting boatneck shirts paired with looser pants and  grey pieces were standouts on my radar. 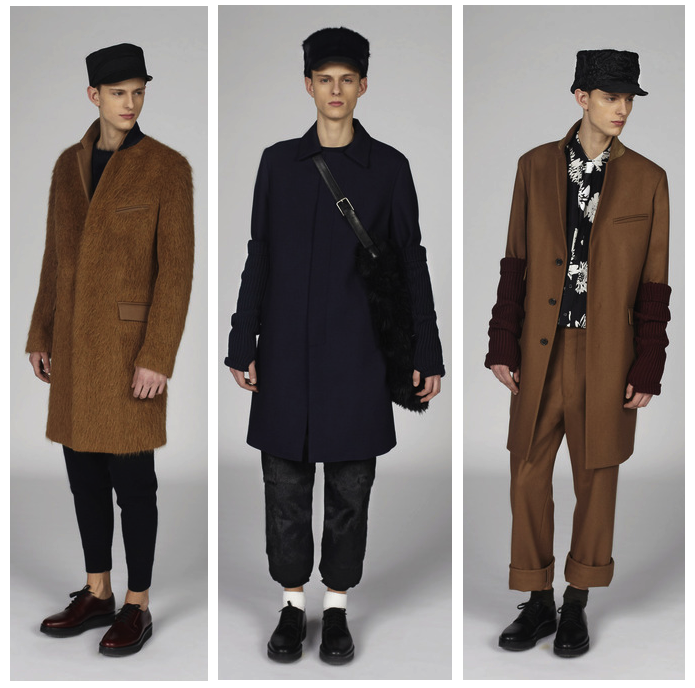 For Fall 2014, I love the way Marni’s creative director Consuelo Castiglioni combined luxury and sportswear. Classic silhouettes were made more interesting with whimsical fantasy in the form of fur every which way. Schoolboy hats, vests, satchels, tote bags, pants and detachable collars were all given a luxurious treatment in black fur. The collection had a mixture of boyish charm and grown-up elegance. I personally liked the wider-legged, cuffed suit pants, long coats and knitted sleeves. 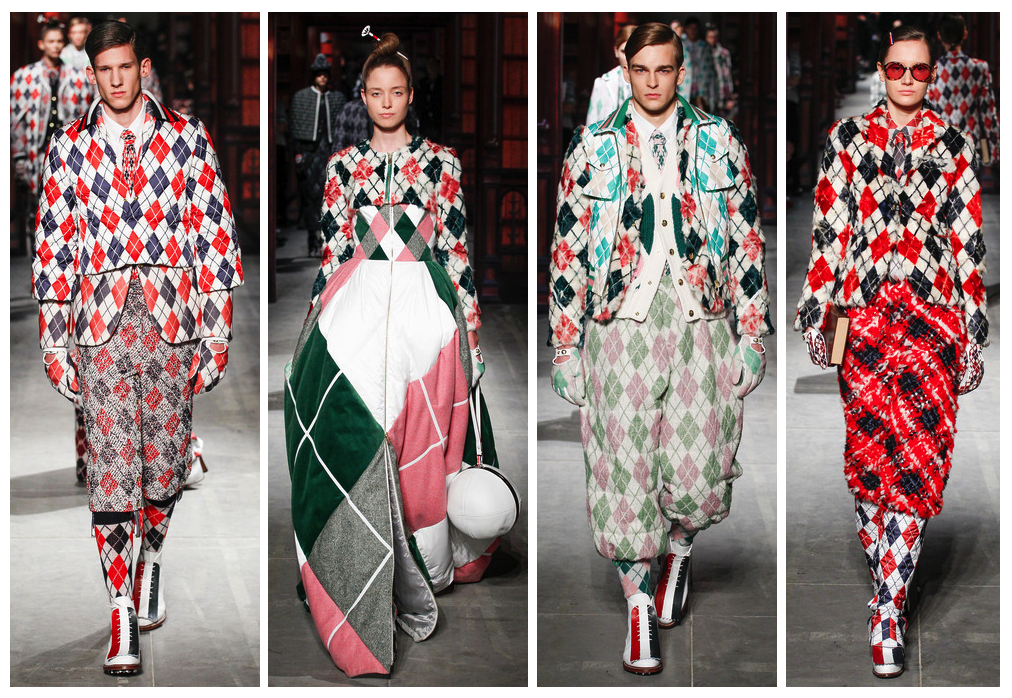 Thom Browne’s Moncler Gamme Bleu, the menswear division of the French brand, is always a haven for the slightly off-kilter. Browne has a tendency in this sportswear-inspired collection to blur the lines of gender and formal masculinity. In any fashion context this is perspective-shifting, but especially so in the realm of a brand which produces mainly sportswear. For fall 2014, however, Thom Browne officially introduced womenswear into Gamme Bleu. The collection was inspired by skiwear, argyle, and quilted jackets. While the clothes themselves were abrasive and even unwearable in most contexts, I appreciate how Browne relentlessly pursued an idea and exploited it to the maximum. His designs always force viewers to shift their way of thinking about clothes, in this case recreation wear. Thom Browne isn’t afraid to make ugly or shocking clothing. But one could argue that amidst the mess of layer upon layer of argyle, the designer managed to create some pretty unique and beautiful moments. 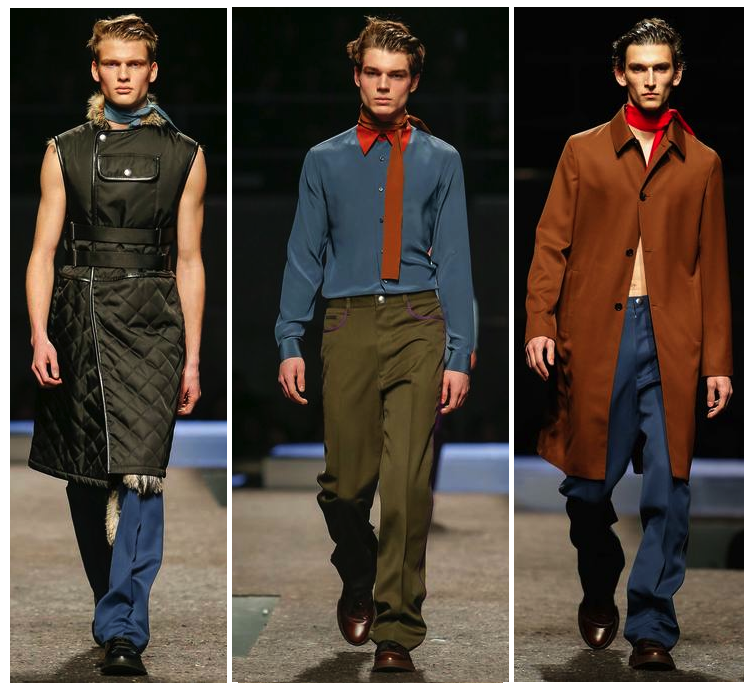 Miuccia Prada’s spring ready-to-wear collection addressed feminism and female power and her previous menswear collection explored ideas of natural paradise in contrast to human suffering. In her collections, one can always expect subtle subversion, never a slap in the face. So the question one must ask with Prada is always What is Miuccia trying to tell us now? For fall 2014, Prada’s men were glamorous and a little sloppy. All political and social undertones aside (to which I am mostly obtuse), the clothes were a lot of fun. A nice array of color was displayed, focusing on purples, blues, reds and ochres. All the men’s pants were worn large and the hair was unkempt and greasy. It was glamour minus caring what others think. In contrast, the bags the models carried, as well as a few strapped top pieces, had a stark militaristic vibe. The runway’s design—an ominous sprawl of platforms and stairs raised high above the audience—also hinted at a dark undercurrent. An image I was reminded of by looking at the men was that of a child playing dress-up. The clothes were dapper but had a slightly awkward fitting, like they were borrowed. The men wore boas which flailed about over their suits, reminding me of a little boy who had explored his mother’s closet. Whether the narrative of this season was political or merely playful, the subtly unsettling nature of the clothing’s presentation was, as usual, what made Prada’s collection worth considering. 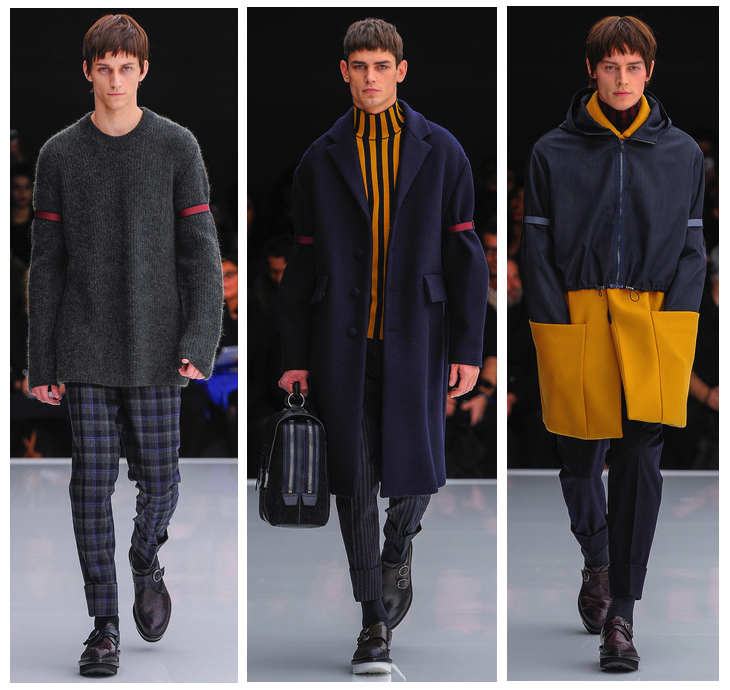 Z Zegna is a sub-brand of the Italian menswear giant Ermenegildo Zegna, aimed at a more youthful and urban man. In a 2013 interview, creative director of the brand Paul Surridge said of his target dresser: “Our customer is fashion aware, but he isn’t a fashionista,” he explained. “He sees clothing as an investment, not as his sole priority.” Surridge stayed true to this mentality for his fall 2014 collection, which was inspired by sixties London, down to the Beatles-esque mops of hair. The collection was image-conscious but simplistic. Surridge referenced a specific fashion moment without making the clothes anachronistic, in keeping with the spirit of the brand. The artistic touches such as the red arm bands or the half-length jackets worn over heavy coats kept the collection interesting and up-to-date.

Collages and copy by Jack Meriwether, original images from Style.com. For more from Jack, check out his Tumblr or photography blog.